The Seven Isaacs is the culmination of all of my years of writing screenplays, music, and short essays expanded into a much broader novel form.  The Seven Isaacs began as a small idea following broad X-Men-ish idea of small children with certain abilities as they are let loose into the world after the lab they were raised in was shut down by the government.  The entire story developed from an image I saw in my head of little kids in white hospital scrubs opening up a manhole cover in the middle of a giant field.  From there, the seeds of the idea were planted.

The story festered in my head for many years as Pressfield’s Resistance had a firm grasp on me in the form of hatred and divorce.  I spent quite a few years just trying to get a grip on my personal life and to find some order amidst the chaos.  When life turned around, an iPad was put in my hands and the Muse spoke freely through me.  I was nothing but a mere writing conduit as I let that force take me over and spill the touching and heartfelt story of these children set forth on this earth and learning what it was like to be human. 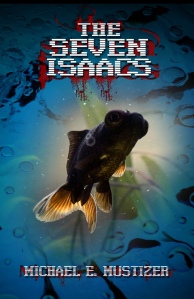 Eight and his six siblings are by-products of an underground, illegal human cloning experiment.  Born and raised in a laboratory under constant scrutiny, observation and experimentation, they’ve rarely, if ever seen the blue skies of the world outside.

While struggling with the rising emotions of anger, greed, love, loss and religion, they quickly learn their delicate place in this world, along with the frailty of their bodies and minds as they cope with ticking time-bomb medical side-effects of their human condition.

Their only hope is to overcome their challenges and find the deep, dark secrets of their creation (and find out what happened to One) in order to diffuse the internal self-destruct mechanism that is residing inside all of them.

The Seven Isaacs is now available on Amazon. Exclusive to Kindle until Feb 2020.